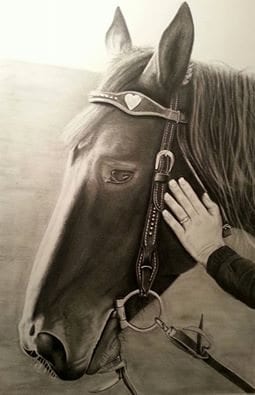 Want to thank God for helping me with this picture. -“A Silent Love” was commissioned for Taryn Strayer.

A few years ago Taryn and her horse crossed paths when he was on his way to the slaughter house for having a parrot mouth ( He later grew out of).

Bucky helped Taryn through many tough times in life and helped her gain self confidence even when she didnt believe in herself.

Taryn’s grandpa who introduced her to horses, had the opportunity to help train Bucky and work with Taryn until he passed later from brain cancer. She was really close to her grandpa and misses him very much. The hard hit came with a softer blow when she turned to Bucky for Healing, Love, Understanding and Friendship.

On a sad day on August 27, 2015 the world lost a gentle soul as Bucky passed away from colic.

His calm demeanor and gentle kindness will never be forgotten.

Thank you for looking and have a blessed day.

I don’t know if it’s talent or gift or both! Your drawings are magnificent!

This site uses Akismet to reduce spam. Learn how your comment data is processed.